Would you like to still travel? Now you can without leaving your home – just stay still!  Let us whisk you away for an "armchair adventure" on an interesting, educational, fun & live, guided group tour in a destination beyond your front door ..even beyond the grocery store!  Forget the long, masked airplane ride, we take you across the time zones by Zoom where a local professional guide from a distant destination will take us to explore sites or topics. Live Q&A, photos, graphics & video clips (when available) will transport us to the destination!

CLICK HERE to "meet" James and get an overview of the travel program.

Many tourists to southern Spain race to Grenada to visit the Alhambra, but overlook the capital and largest city of the Andalusian region – Seville! Make a tinto de verano (so much more popular in Seville than sangria; click here for a recipe), grab a piece of Manchego, join Trip Leader James Sokol and our wonderful, professional, local guide to discover an array of fascinating and stunning facets of this sensational, yet quaint city.

Begin our time in this Andalusian gem with a historical overview before entering the Alcazar –the amazing castle/fortress, a UNESCO World Heritage site, and the oldest palace in all of Europe still in use (when the king of Spain comes to Seville). Inside this 10th century complex are 3 beautiful palaces from various times; a blend of Christian-Muslim-Jewish cultures that goes back to the Middle ages and the golden period of Seville in the 1500s. Also hidden behind the grand walls are beautiful gardens with fountains and tiles; a refreshing escape from the city noise. “Meet” some of the kings, queens, poets and navigators such as Columbus, Magellan, Queen Isabella or Catherine of Aragon, who strolled this paths and hallowed halls. Also a surprise for Games of Thrones fans. Join us!

On the site of a former mosque, the ambitious construction of The Cathedral of Santa Maria – the 3rd largest cathedral in the world – started in the 1400s in gothic style. Explore this massive & magnificent structure. From the original mosque, today still stands the inner courtyard and the iconic minaret, the famous Giralda. Almost a museum, the Cathedral has a huge double organ and a main gold altarpiece adorned with paintings by the best Spanish baroque artists. Explore the mystery of the tomb of Christopher Columbus, who may or may not actually be buried there.

From the Middle Ages, Seville had an important Sephardic Jewish population. Find out where they lived, learn about their jobs, and about their relationship with Muslims & Christians in different periods. Follow our local guide to look for their traces in a hidden underground parking, on the site of a former synagogue, and inside a most original hotel. The lovely streets of the Santa Cruz quarter still hold memories & legends of the Sevillian Jews and of a time of conviviality for the three cultures until the appearance of the Inquisition. See how, today, the former Jewish population is remembered and honored.

Though the city is filled with glorious remnants of the past, two major 20th century events left impressive sites – the 1929 Ibero-American Expo and the 1992 World Fair celebrating the anniversary of the Discovery of America. Visit these modern treasures and see how, in the 21st century, the city faces the future and new constructions, some of which are controversial in this most traditional city.

Give-Us-A-Try Tickets ($15): Single ticket for Jan 4 tour only. Check us out by giving our first class a try. Single tickets are not available to subsequent classes; unfortunately, single tickets cannot be credited toward series purchase.

All Tickets: ...are 1) are per device, not per person on Zoom, and 2) are non-refundable & non-exchangeable.

Let JCC Trip Leader James Sokol zoom you to New York City to meet and "tour" with our terrific, local guide, a Broadway history expert who shares interesting stories, rarely seen photographs & videos to see Broadway's past and present merge before their eyes.

Explore the Broadway theaters at the southern end of the Broadway theatre district from 41st Street to 44th Street. Journey back in time with our guide to Broadway's early years full of roof garden theaters, tap shoes, and theatrical con artists. Learn the true difference between a Broadway theater and an Off-Broadway theater and revel in the secrets hidden in plain sight in some of Broadway's most famous theaters. Tour-goers will hear how a show is created from the first rehearsal to opening night and all of the craziness in between. And, of course, we'll explore the spirits that may still be lurking in the shadows backstage with a few unbelievable ghost stories. 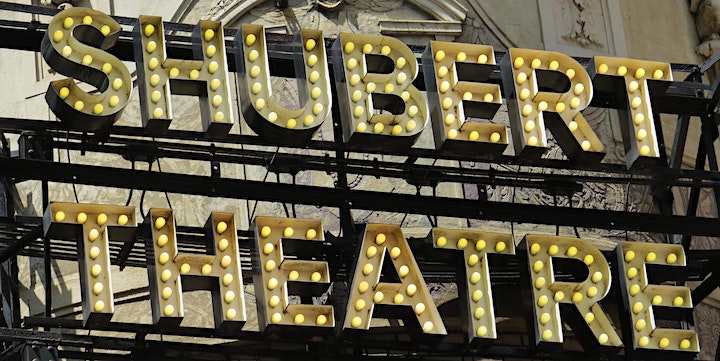 Explore the Broadway theaters in the central Theater District from 44th Street to 46th Street. As Times Square transformed from an area full of manure and horse stables to one of the busiest tourist destinations in the world, a battle for Broadway was brewing between a group of theatrical titans and three scrappy brothers with the last name of Shubert. Set against the backdrop of Broadway's most famous theaters, tour-goers will hear about the Shubert Brothers who monopolized Broadway against all odds with the help of an awkwardly named architect. Add in the true origins of the Tony Awards and rarely heard stories from famous musicals ranging from Oklahoma! to Hamilton and walk away with a new appreciation for just how far Broadway has come over the past 100 years.

Celebrate Presidents' Day with an exploration of one of the US’ Founding Fathers. For those obsessed with or wanting to learn more about the real settings of Hamilton: An American Musical, follow our guide on Alexander Hamilton’s sidewalks and explore “the revolution happening in New York” in the 1700’s. In addition to seeing the historical sites, hear stories and secrets about the creation of the record-breaking musical. After culminating at the gravesite of Alexander & Eliza Hamilton, tour guest may walk away even more obsessed with the show than ever before! Be sure to join us so that you, too, will be “in the room where it happens!”

Explore the Broadway theaters at the northern end of the Broadway theatre district from 47th Street to 54th Street. Weave among the original facades on the sidewalks north of Times Square and hear how Broadway transformed with the first million dollar show and the introduction of rock musicals. Learn how a dog named Sandy would change one Tony Award winner's life - and Broadway's canine future - while little orphan Annie belted "Tomorrow" in front of thousands. And with some of Broadway's longest running shows, from Hair! to Wicked, housed within these blocks, our guide will bring to light the backstage quirks and secrets that are rarely heard.

Give-Us-A-Try Ticket ($12.50): Check us out by giving our first "trip" (Feb 1) a try. Single tickets are not available to subsequent trips and cannot be credited toward series purchase.

All Tickets: ...are 1) are per device, not per person on Zoom, and 2) are non-refundable & non-exchangeable.

Let JCC trip leader James Sokol whisk you away to The Netherlands to explore – with a terrific, professional local guide – facets of their beloved cheese. Begin off the beaten path at the quaint farm/shop where our guide buys her cheese. Learn about her traditional Dutch breakfast. Follow our guide to for a highlights tour of the town of Gouda and other points of cheesy interest. Finally, head to Amsterdam for a stop at the Rijksmuseum to see how cheese shows up in Dutch art.

Ticket Sales end 2-hours prior to the visit to allow for proper set-up time.

All tickets are 1) are per device, not per person, on Zoom, and 2) are non-refundable & non-exchangeable.