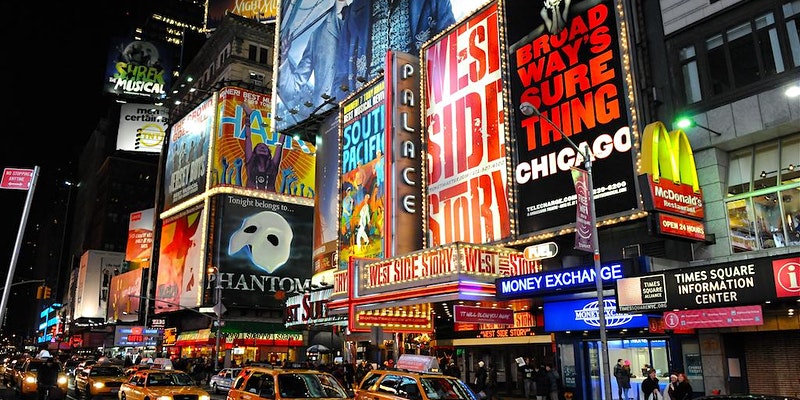 Praise for our Exploring Broadway series:

“These classes are so good that I have thank you. You share so many wonderful insights and make it so much fun. Your choices of songs are absolutely great. I’m already looking forward to the next ones.” – Shirley L.

“Thanks for the delightful and educational classes. They are both interesting and fun; the presenter and the material were terrific.” – Sandi B.

“Thank you so much! I loved the class — learned several things I did not know — and very much looking forward to next week!” – Linda C.

Musical theater may be stereotyped as light, frothy, romantic, even silly. But, from its earliest days, the art form has taken on serious issues within the confines of a lighter style, often making challenging subjects more palpable. From looking at racial & religious prejudice to gender roles, sexual orientation, political practices, and more, songs provide a unique approach to dealing with major social issues. Join James Sokol on a journey with audio & video performance clips through songs of protest, social commentary and others with meaningful messages. Come for the songs; stay for the fun!  For details & tickets, click here.

The “patter song” has been a staple of theater since Mozart, gaining in popularity in 19th-century comic opera and operetta. In the time since, these delightful, fast-tempo, tongue-twisting songs have wended their ways into 20th-century musicals.  Join James Sokol on a journey, which includes audio & video performance clips, of these potentially scene-stealing songs from Broadway's “Golden Age” gems to contemporary favorites.  Come for the songs; stay for the fun!  For details & tickets, click here.

“List songs” – sometimes called “laundry list songs” or even “catalog songs” – are said to date back to the ancient Greeks.  In modern times, they appeared in 18th & 19th century operas, and certainly blossomed in Gilbert & Sullivan’s operettas in the late 19th century.  In the 20th century, Cole Porter and Irving Berlin made them popular on Broadway.  In the time since, others – including Rodgers & Hammerstein, Jule Styne, Stephen Sondheim, and others – have carried this tradition on in their musicals.

Join James Sokol for this special mini-series focused on these songs, which are often funny, sometimes even “escalating to absurdity.”  Other times, they can even be dark and introspective, but always interesting!  Audio & video performance clips from musicals of “the Golden Age” to contemporary classics bring the magic of Broadway into our discussion.  🎫 Purchase tickets here. Early bird ends 5/5.

Sheldon Harnick and Jerry Bock’s beloved Fiddler on the Roof is widely considered the last of Broadway’s “Golden Age” musicals. Before its premiere, some producers were concerned that it was "too Jewish" to attract mainstream audiences. However, the touching story and beautiful score proved to capture “the essential human longings for love, community, success, freedom, and family.” Join instructor James Sokol for a one-time exploration – filled with interesting facts, delightful tidbits & nostalgic video clips – of this perennial favorite!  Come for the songs; stay for the fun! 🎫 Purchase tickets here.

The Albany JCC offers in person and virtual programs for adults and senior adults!